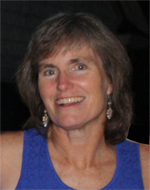 My name is Maureen Good Finigan, but I go by the nickname Moe. I graduated from the University of New Hampshire with a Computer Science degree in 1986. After graduation, I worked for GTE writing code for a mobile secure communications system. From there I went off to ski in Telluride, CO for a few years, then moved to Milwaukee, WI where I earned an M.S. in Computer Science from the University of Wisconsin, Milwaukee in 1995. I have since written user interface software using C++ for Johnson Controls, Federal Products, then for Compuware Consulting. I took a reprieve to care for my four children, and since 2007 I have been writing web software.

In college I was a swimmer. After college I was a skier. When I moved to Milwaukee I worked full time, went to school and defended my Masters’ Thesis in my ninth month of pregnancy. After kids I became a runner, running 4 Boston marathons, 2 NYC marathons and a total of 14 altogether.

I live in Providence, RI with my husband and our dog Kazoo, while our four adult children are scattered across the country.